Lake Como – a part of the Italian lake district

The Italian Lake District stretches across Northern Italy, up to the border to Switzerland. Some of the lakes even straddle the border and enters into Swiss territory. It contains a number of other famous lakes then Lake como such as Lake Garda and Lake Maggiore.

Generally speaking, the northern end of the lake district is mountainous and hilly, while the southern region is flatter and considered a continuation of the River Po plain. The northern part of the district reaches deep into the Alps.

The lake district is blessed with an attractive climate and beautiful scenery. A lot of the vegetation is Mediterranean rather than pre-alpine or alpine, since the lakes help keep the winters mild. Many of the grand villas around the lakes have gardens were exotic tropical plants can survive.

Located within the region of Lombardy in northern Italy, Lake Como is one of the most famous lakes in the nation’s picturesque lake district. Even back during the Roman era, the rich and famous were attracted to Lake Como and its surrounding hill sides to escape the hustle and bustle of Rome in the summer time. Pliny the Younger (61-circa 113 AD) – a famous lawyer, author and magistrate of Ancient Rome – had not just one but two villas here. He called the one down by the lake Comedia and the one up on the hill Tragedia.

In Italian, this lake is chiefly known as Lago di Como, but it also has another name: Lago di Lario or simply Lario. Lario is an Italianised version of Larius, which is what the Latin-speaking Romans called this lake. In the local Lombard language, the lake is named Lagh de Còmm. 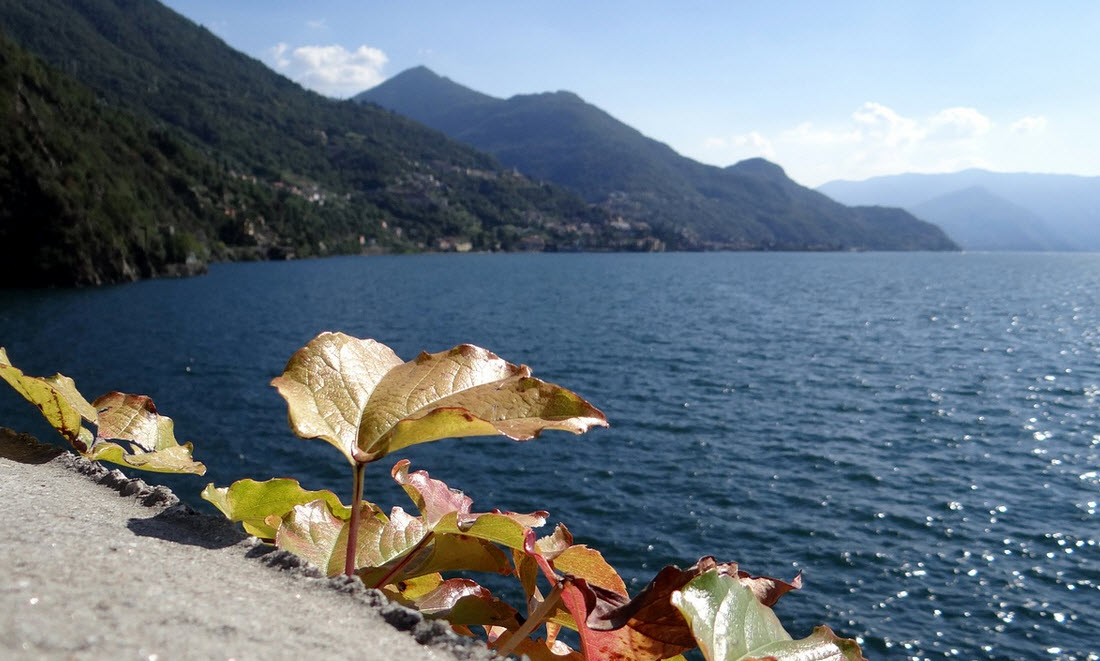 Size and depth of Lake Como

Lake Como has a surface area of 146 square kilometres and is thus Italy’s third-largest lake. (Lake Garda and Lake Maggiore are larger.) Lake Como is also a very deep lake; at its deepest part it descents for more than 400 metres below the surface, making it one of the deepest lakes in all of Europe. At this point, the bottom of the lake is more than 200 metres below sea level.

One of the main cities on the shores of the northern branch of Lake Como is Colico, and this branch is therefore often referred to as the Colico branch. The River Adda enters Lake Come by Colico. Roughly 7,700 people live in Colico.

This branch is commonly known as the Como branch, since the city of Como is located at its southernmost extremity. This city is home to approximately 85,000 people and is thus the most populated city along the shores of Lake Como.

This branch is quite prone to flooding, because Lake Como’s primary outflow is in the southeastern branch

This branch is typically referred to as the Lecco branch, since Lecco is the main city along its shores. Lecco has about 50,000 residents.

At the end of this branch, the River Adda, which is the lake’s primary outflow, leaves the lake. (Adda eventually joins the River Po further to the south.)

The climate here is humid subtropical. The presence of the large Lake Como helps keep the temperature up; the winters would be considerably colder without it.

May is the rainiest month.

Examples of settlements around the shore

Along the southern shore

Along the eastern shore

Along the western shore

Public ferries, motorships and hydrofoils transport passengers on Lake Como, and some of the ferries are large enough to also transport cars and motorbikes.

Ferries run between Menaggio, Bellagio, Varenna and Cadenabbia which are all located near the part of the lake where the northern branch splits to form the southwestern and the southeastern branches.

In the northern and southwestern branches of Lake Como, motorships and hydrofoils dominate the public transport. The hydrofoils are faster, but also more expensive.

The shores of Lake Como are famous for the many grand villas that have been built here throughout the centuries. Many of these villas also feature spectacular gardens and parks.

Fortunately for visitors, not all grand villas around Lake Como are closed off private spaces. Some of them are actually open to the public (for an entrance fee), including Villa Carolotta (built in 1690), Villa del Balbianello (built in 1787), Villa Melzi d’Esti and Villa Serbelloni.

Villa del Balbianello houses a famous casino that you can visit and gamble in.  The casino was featured in the James Bond movie Casino Royal (2006 not 1967). The casino is elegant and worth a visit.  Make sure you know how to play the games before you visit Villa del Balbianello casino.  You can learn how the play for free in online casinos. They allow you to play using virtual money.  I personally recommend that you try LeoVegas casino. A very well designed online casino that makes it easy to learn how play different casino games.

Isola Camonica is an island in Lake Como, close to the western shore of the Como branch, in front of the Zoco de I’oli gulf. Administratively, the island is a part of the comune Ossuccio.

The island has three artist houses, a restaurant, a cafe and a collection or archaeological sites.

Even though the Western Roman Empire fell in the 5th century AD, Isola Comanica was still a Roman stronghold during the 6th century, when it was ruled by Francio, a subordinate of Narses. At this point, the areas surrounding Lake Como was no longer under Roman control – they were ruled by the Lombards. When the Lombards finally took the island, they found many treasures there.

In 1169 AD the Holy Roman Empire Frederick Barbarossa invaded the island with the help of soldiers from the City of Como.

In 1175, the island was cursed by Vidulfo, Bishop of Como, who proclaimed that “The bells will never ring, the rocks will never be placed one over the other, nobody will do here the work of the publican, the punishment a violent death.”

In 1919, the island was given to Belgium, but Belgium returned it the following year.

Right before the start of World War II, Pietro Lingeri built three houses on the island from local materials. The houses, which were built in rationalist style, was intended to become a colony for artists. Today, these three houses still remain on the island.