Lake Lugano is a lake on the border of Italy and Switzerland, between Lake Como and Lake Maggiore. Nearly two-thirds of the lake is in Switzerland and the remaining part in Italy.

The lake, which is of glacial origin, is nestled among beautiful mountains and is a popular tourist destination for boating. Regrettably, Lake Lugano is still heavily polluted and bathing in it is considered risky.

Examples of well-establish hot spots for tourism around the lake are Monte San Salvatore, Monte Generoso and Monte Brè. 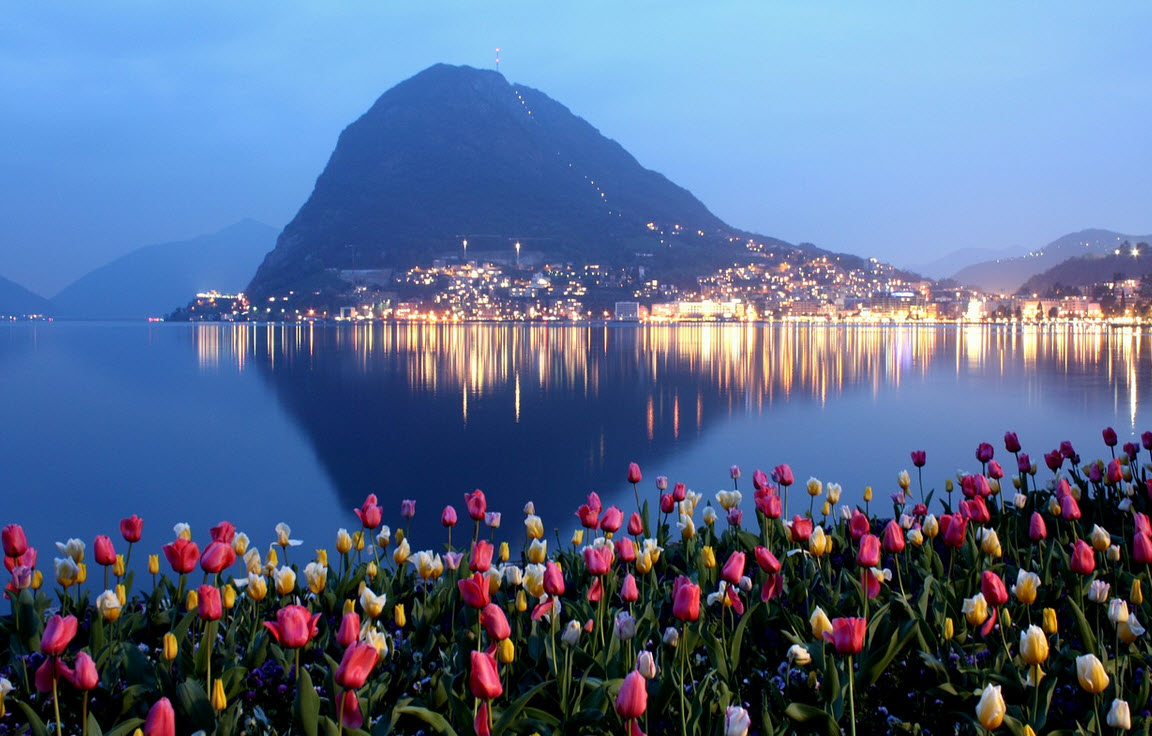 The name Lake Lugano is derived from the city of Lugano, located on the lake’s shore in southern Switzerland, within an Italian-speaking canton of Ticino, and surrounded by the Lugano Prealps.

The oldest known usage of the name Lago di Ceresio is from 590 AD when Gallo-Roman historian Gregory of Tours calls the lake by this name in one of this texts. This name is said to be derived from the abundance of cherry trees which used to grow along the lake’s shores. (The Latin word for cherry is cerasus.)

In some documents from the early 9th century AD, the lake is referred to as Laco Luanasco.

The northern and the southern part

The causeway doesn’t completely cut the two basins off from each other, because a bridge in the causeway allows water to pass between the basins. Built on a moraine between Melide and Bissone in 1848, the causeway made it possible to establish a direct road connection between Lugano in Italy and Chiasso on the other side of the Swiss border. Today, the causeway is also for railway.

Examples of cities, towns and municipalities located around Lake Lugano.

In both Italy and Switzerland

Passenger boats on the lake

The fleet is comprised of various types of boats. Here are a few examples:

There is an area behind the southern shore of Lake Lugano that is very rich in fossils. This includes the UNESCO World Heritage site Monte San Giorgio. Many of the fossils have been dated to the mid-Triassic era, which means that they are around 220 million year old.

The first proof of a political body governing the shores of Lake Lugano are from the 9th century AD. After this, the lake was included in the County of Sperio, before falling under the domain of the Bishop of Como around year 1000.

Due to its strategic location, those seeking to control the region – and especially the traffic to and from the alps – have always wanted to take control over Lake Lugano. Control over the Alpine traffic was for instance why Como and Milan fought each other by Lake Lugano in the 13th century.

In 1752, the border between Switzerland and Italy was fixed by the Treaty of Varese and the lake was shared by the two countries.

Campione d’Italia is an Italian exclave on the shores of Lake Lugano, within the Swiss Canton of Ticino. By European Customs Law, the exclave – including some of the lake – is considered non-territorial for fiscal purposes and enjoys a special tax status. This includes, among other things, exemption from EU VAT.

The largest employer in the municipality Campione d’Italia is the famous Casinò di Campione, with over 50 tables and around 500 slot machines. Examples of available table games are roulette, black jack, baccarat, baccarat chemin de fer, and poker.

This casino has a mesmerising history; it was founded back in 1917 not to bring in money but to lure in foreign diplomats during the First World War and obtain information from them.

In 2007, the casino moved into new premises with more than 55,000 square metres of floor space, designed by Mario Botta. There are nine above the ground floors + three underground floors.